I had the great idea of trying to cook spaghetti squash after my friend sent me a photo of her dish from New York and I thought – wow, that looks so yummy. I can do that. Totally. Right? It’s just squash. I’ve roasted squash before!

Enter Pinterest and lo and behold, so many easy spaghetti squash recipes to choose from!

Last night I made spaghetti squash for the second time, with similar success, and it reminded me that I’ve had this post sitting in drafts for a while, so here you go – my spaghetti squash cooking adventures.

The first time, I ran into trouble just trying to cut open the squash. Haha. (Since then, I have obtained a knife sharpener and yesterday the process went much smoother). I felt like I was hacking it open with a file. Plus I was worried about stabbing myself as I was stabbing the squash and all in all not a very fun way to start. 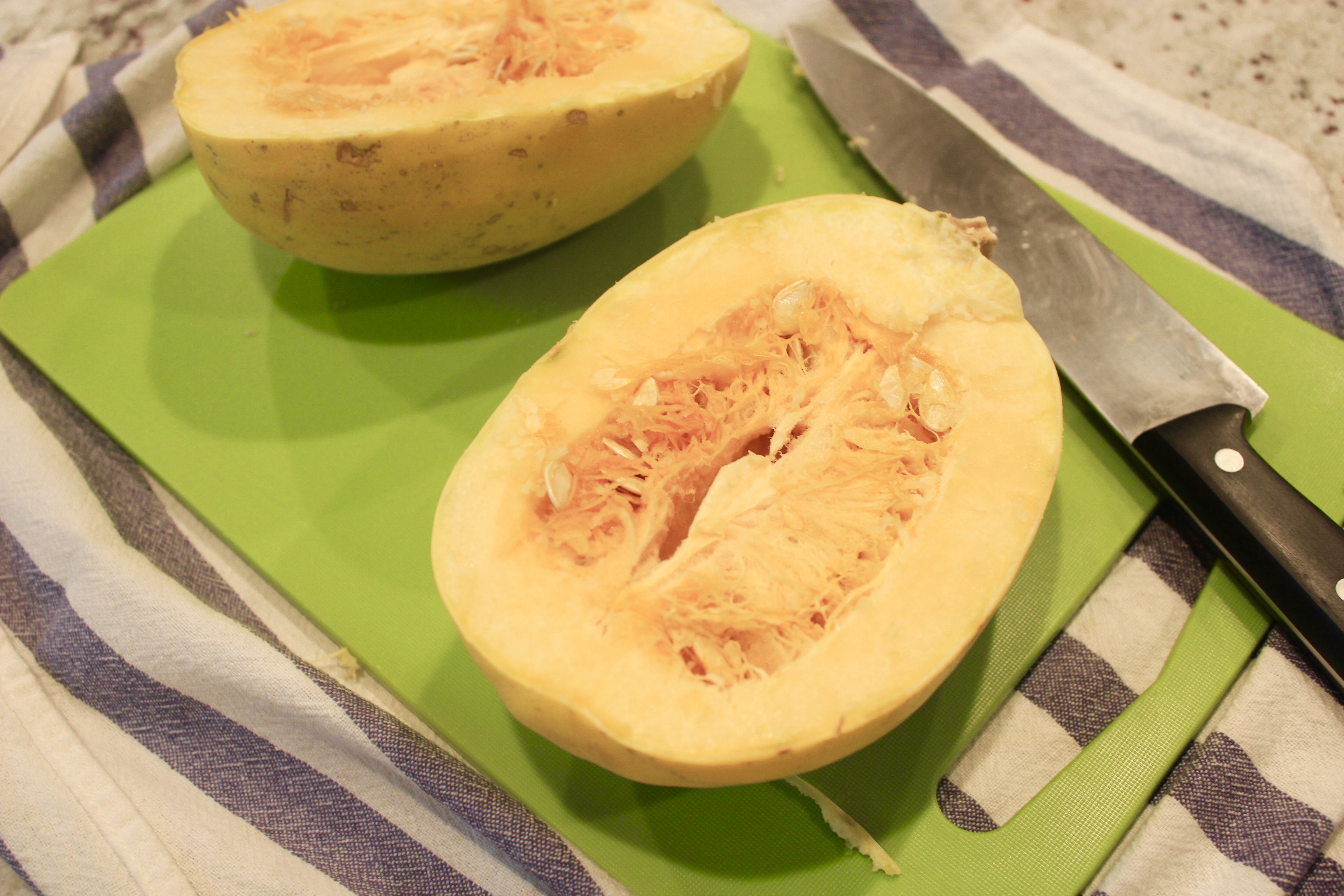 When I did get it open, I was surprised because I didn’t see the stringy parts! I always wish cooking blogs show not just the finished dish but the pre-cooked parts as well, even if it’s not as photogenic. (Like recently, when I was making the slow cooker pork, I had no idea what ratio liquid to meat there should have been. Could have been solved by a photo. An ugly photo of chunks of gross raw meat bobbing in liquid but whatever.)

I based my recipe loosely off of this one – loosely because I did not manage to caramelize my onions and it took a lot longer than 35 minutes. 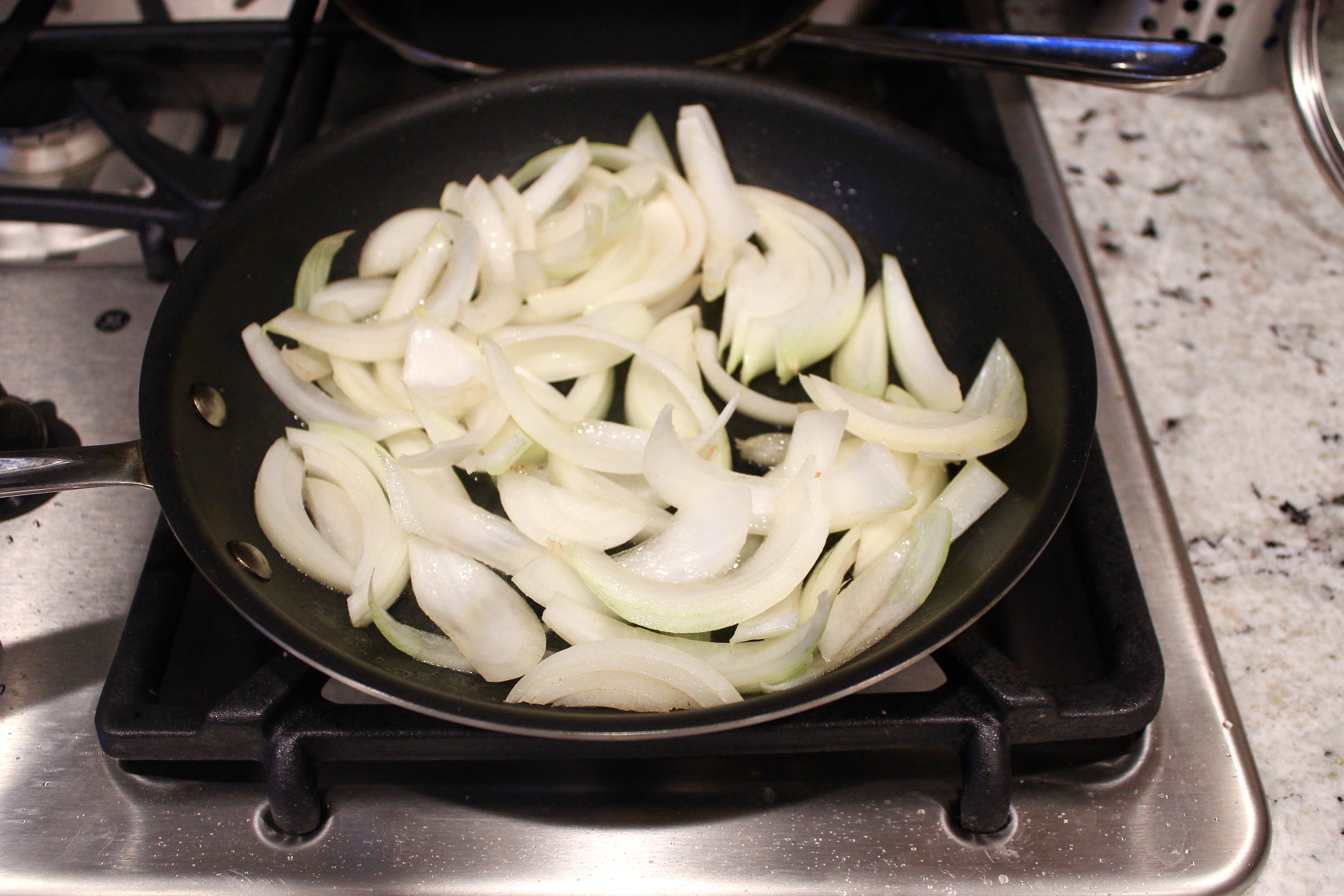 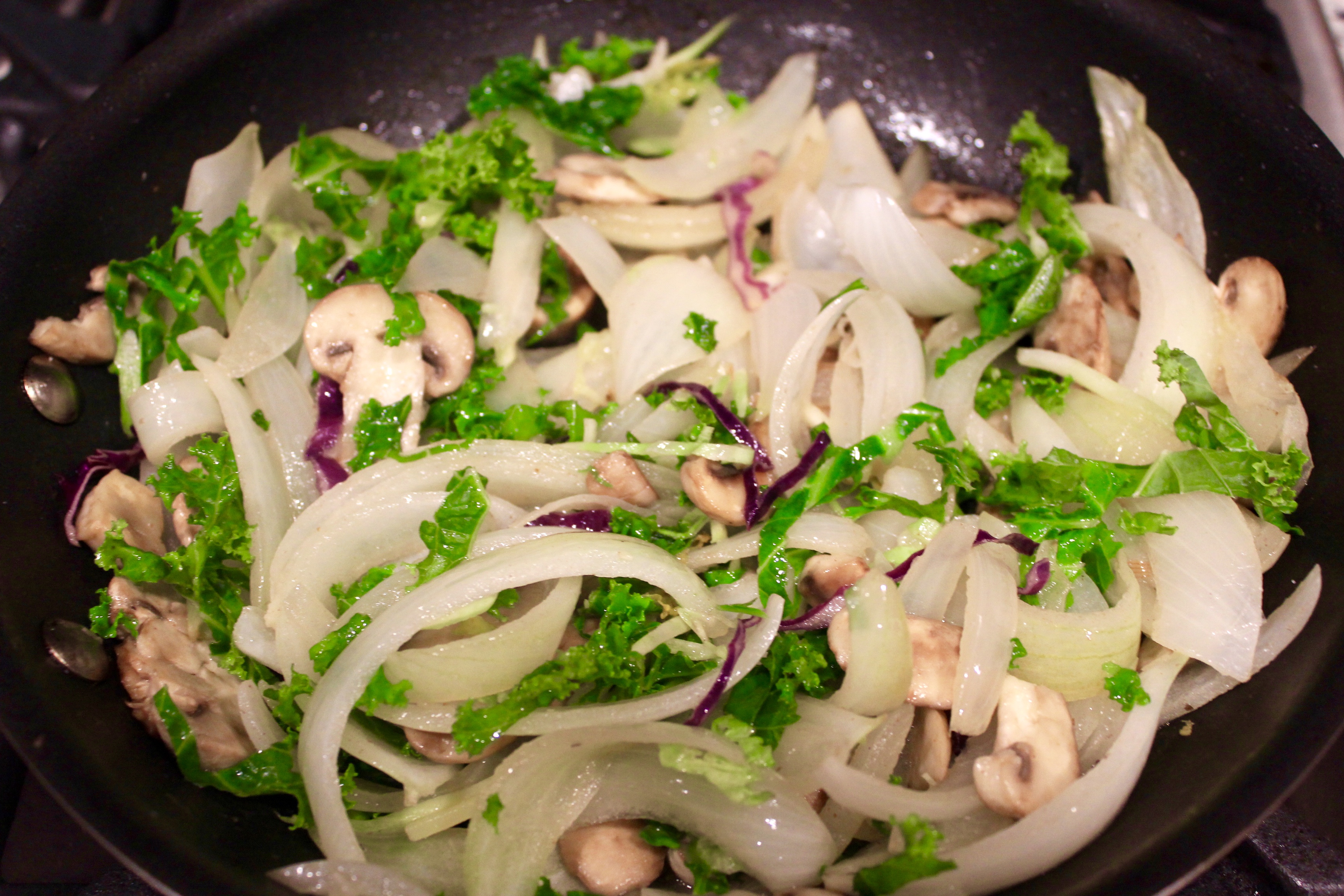 The second time, I was a little more successful in starting to caramelize the onions but then I dumped in the mushrooms (big, beautiful, fresh mushrooms) and they produced so much water my caramelizing was thwarted. 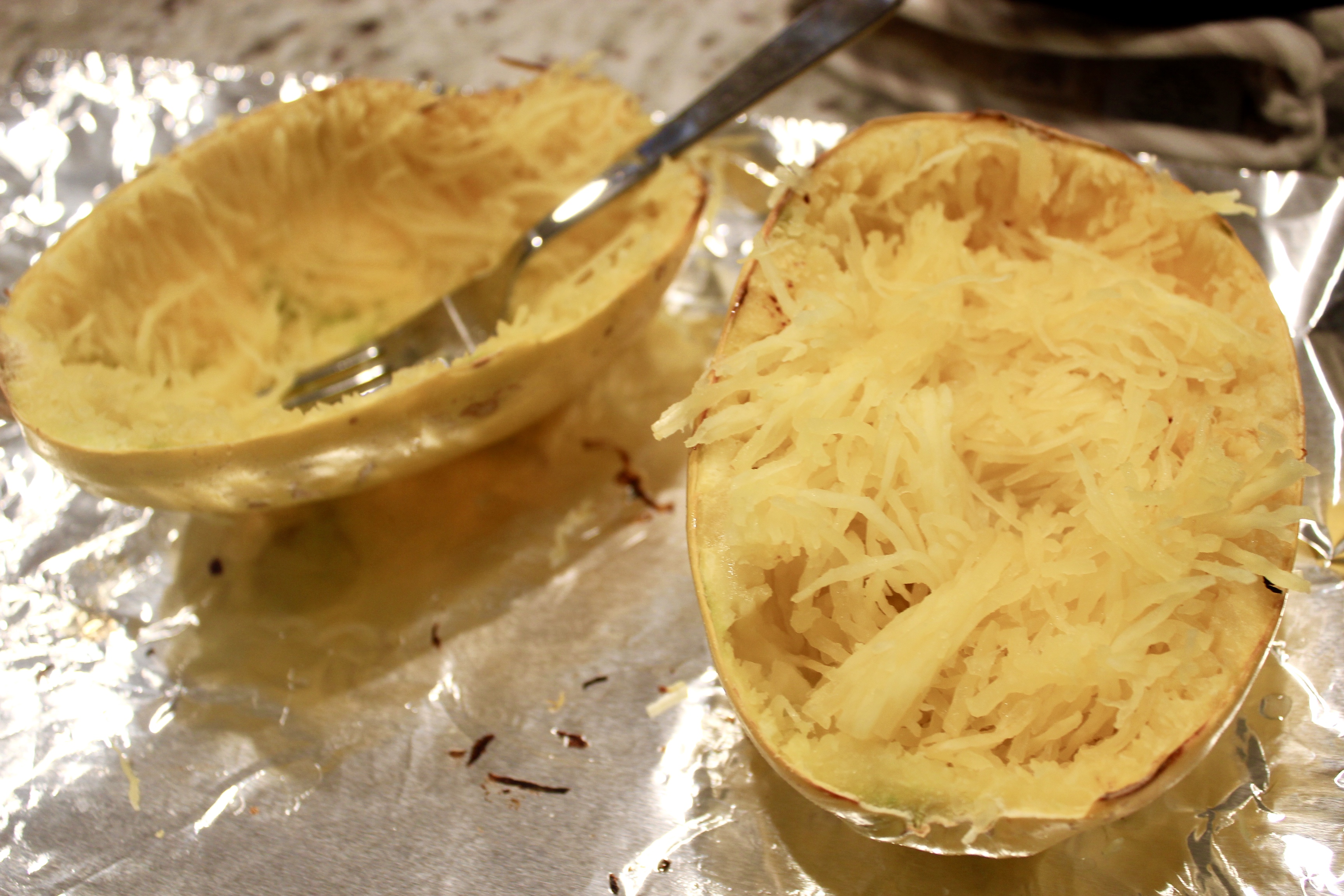 By far the most exciting part was when I took the squash out of the oven and poked it, and the stringy parts appeared! So fun.

At this point in the night, I ran out to take a Zumba class and forgot to salt the squash “noodles” with the rest of the vegetables so every time I ate the leftovers I had to add salt. (Zumba class is also really fun. Would recommend to anyone who likes to just jump around for an hour and count that as exercise.) 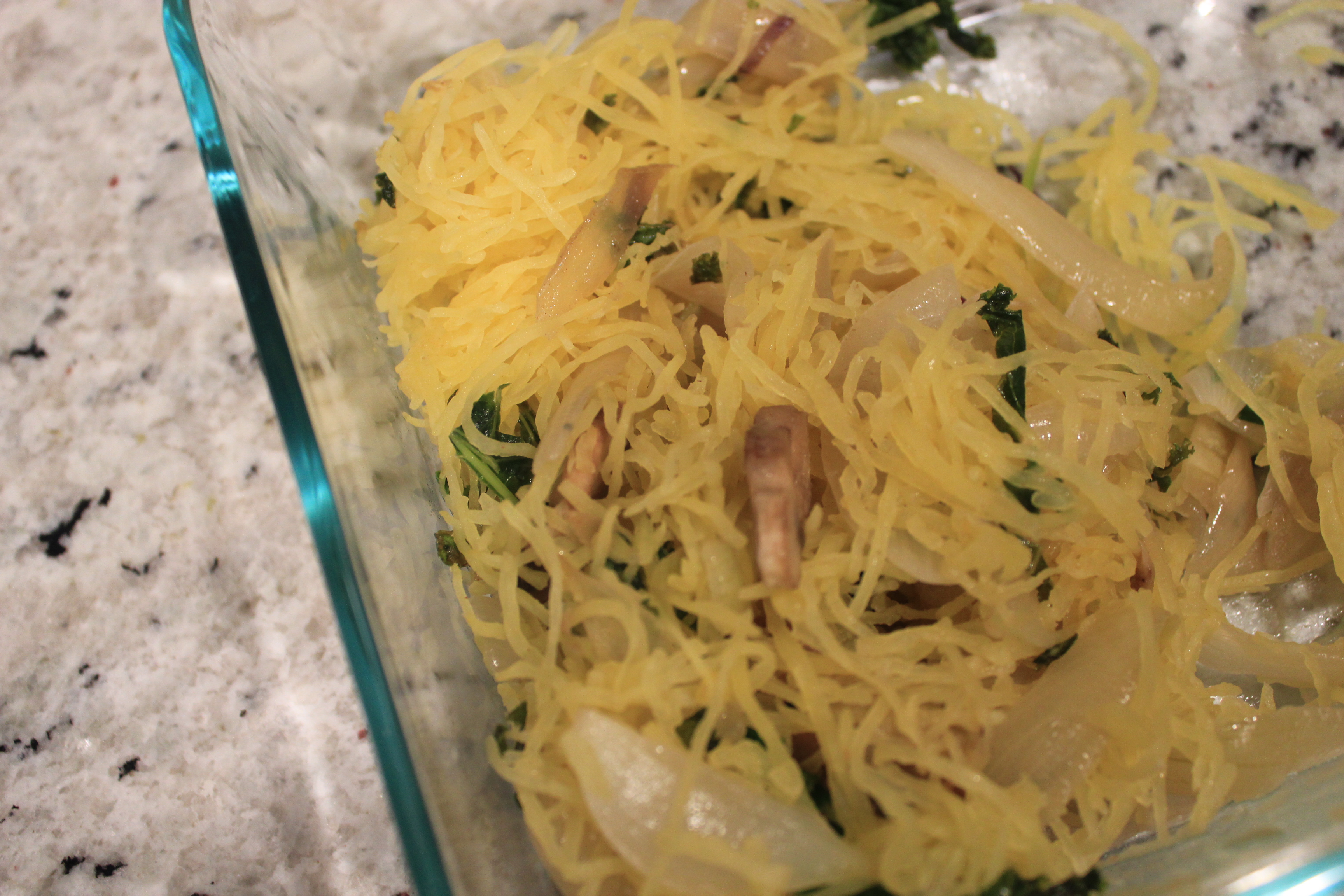 My second batch I added zhucchini instead of kale, which I suspect also made it more wet, so the dish wasn’t as crunchy as the first time, but still good.

Not quite a quick and easy meal, but besides the difficulties (for me) of cutting open the squash, easy preparation and the main part is just sticking the squash in the oven – so I would definitely cook again!