This past week was super super rainy, so all I wanted to do was hide inside and not do anything except for sleep. So I didn’t take many pictures, except a few embarrassing selfies as I tried on glasses with Warby Parker’s try-on-at-home system (which will not be posted here).

The most interesting thing I saw this week that I took a photo of was two dogs “playing” on the sidewalk – I say “playing” because one dog was very very big and the other dog was very very small, so it seemed less like playing and more like the big dog trying to squish the little dog. But neither of the owners seemed too concerned. 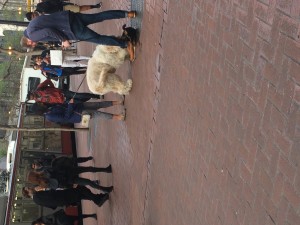 The most interesting thing I saw this week that I wished I took a photo of was of turkeys. Oddly, there are a lot of turkeys in my neighborhood and roam around like they own the place. As I was driving, I saw a lot of turkeys (normally I see 4 or 5 at a time, this time I saw like 9 or 10. That’s a lot of turkeys.) not just walking around on the sidewalk, but perching (can turkeys perch…?) on top of a stone wall, looking into some poor resident’s backyard. It was especially odd because I was under the impression turkeys can’t fly, which means they would have had to just jump and flap their wings slightly to get on top of the stone wall, which even though is sort of flying, it’s still just really weird. And the weirdest part was that they were all facing the same direction, looking into the backyard, so it was like they were plotting to attack. Anyways. I wish I had taken that photo, but alas you’ll just have to take my word for it – and accept the fact that was just as weird as it sounds.